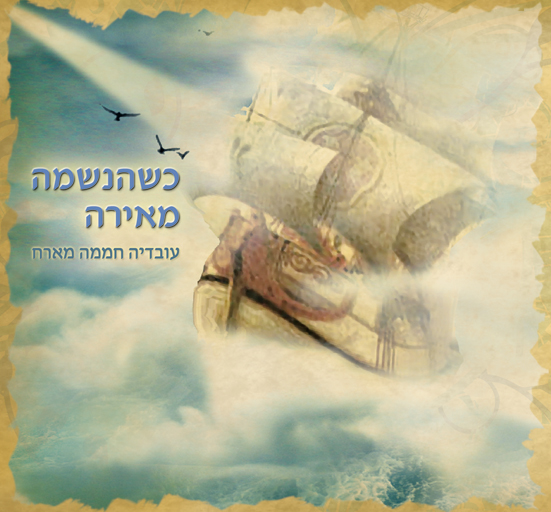 Guest writer Tzippy Lankin, is an Israeli graphic designer and artist. She writes about working on musician Ovadia Hamama’s albums.

Five years ago, a new hybrid of contemporary music hit Israel. Composed by secular musicians, it was set to words from the Bible, or from hymns and songs of celebrated religious poets.

The wave started with one singer, Ovadia Hamama, who I’ve been working with for several years, designing his album covers. Ovadia, who is not religious, composed music set to the words of the ancient Jewish prayer “Ana.” On the album he was joined by nine other singers, including some of Israel’s best known, in effect creating a minyan. In Judaism a minyan is the quorum of ten Jewish adults required for certain religious obligations, like public prayer. Perhaps because Ovadia does not define himself a religious person, the song had widespread appeal with both secular and religious audiences.

My challenge, as a religious person, was to design a cover that reflects the songs’ traditional origins yet appeals to a contemporary audience, whether religious or not. How do I avoid making the design look outdated, archaic or unappealing to the secularists? Ironically, I created (with Ovadia’s help) a cover that looks antique. But rather than “old-timey” it recalls Judaism’s luxurious and rich culture. Inspired by archaeological findings and ancient—particularly Sepharadic—Judaica , I chose to give the artwork a slightly scratched look, like old pictures. Then I added a contemporary Israeli font to bring it into the present. For the next album, again based on traditional songs, historic images were given a discolored look and torn frames, yet contrasted with modern graphics. This time I used a more traditional font.

In his third album, Ovadia’s music was inspired by the songs of Rabbi Kook, the first chief rabbi of Israel. The design for the cover was derived from an old torn page of the Talmud. The font, again traditional, also got that “torn” effect. Moreover, all the images are from Rabbi Kook’s home, now a museum, making the album’s cover a virtual museum in his memory.

As many Israelis seek connections to their Jewish roots, ancient Jewish songs remade by contemporary singers—not necessarily seen as “religious”—become a vibrant link to the rich Jewish culture of the past. For the designer, it is an intriguing challenge full of potential.

Please click HERE to view the album art in its entirety as well as some of  Tzippy’s other projects.